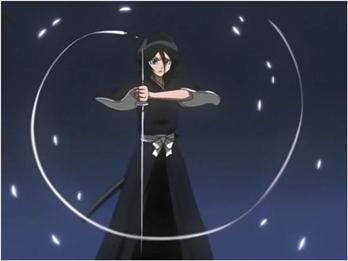 Rukia Kuchiki is an unseated Shinigami in the 13th Division. Though talented enough for a position as a seated officer, has been made ineligible by order of her older brother out of concern for her safety. Initially born into a lower class, Rukia retains her modesty even as an adopted member of the nobility.

Sode no Shirayuki (Sleeved White Snow) In its sealed form, Sode no Shirayuki is a normal katana with a rectangular tsuba with inward-curved corners with curved slits above and below the blade and a series of curved lines embossed on either side of the blade. It has a reddish-brown hilt.

Shikai: Its Shikai command is "Dance" (mae). Rukia holds her Zanpakuto out in front of her and turns it in a circle counter-clockwise. While she is turning it, the blade, hilt and tsuba turn completely white. The tsuba becomes a hollow snowflake-like circle and a white ribbon forms from the pommel from the end of the handle.

Shikai Special Ability: Sode no Shirayuki has control over ice, much like Toshiro Hitsugaya's Hyorinmaru, but uses it in a different manner. Like Kaname Tosen's Suzumushi and Kisuke Urahara's Benihime, Sode no Shirayuki possesses more than one ability in Shikai. Sode no Shirayuki's abilities are labeled as "dances" by Rukia.

Some no mai, Tsukishiro (irst Dance, White Moon): Rukia calls out the name of the dance while holding her Zanpakuto upside down. The blade glows and then she makes a slashing motion when her target is in position. When she does this, a large ice circle forms around her intended target which freezes everything that touches it. The circle not only freezes the ground but everything within the circle's influence including anything above it up in the air, creating an extending pillar of light that then freezes all within in the circle. Shortly after being frozen, the victim then shatters along with the ice. Rukia appears to be able to control the size of the circle at will.

Tsugi no mai, Hakuren (Next Dance, White Ripple): Rukia calls out the name of the dance, and punctures the ground once creating a large ice circle similar to the first dance, then she punctures the ground in front of her four times in a semi circle. She takes a battle stance as the ice particles begin to flow up from the protrusions she made in the ground. They build up and then fires toward the target in a massive, powerful pure-white wave of ice from Sode no Shirayuki's blade, in turn encasing the target in a block of ice.

San no mai, Shirafune (Third Dance, White Sword): Rukia calls out the name of the dance, which allows her to reforge her Zanpakutō with ice particles if it is broken, piercing through objects in its path. After piercing its target, it continues to freeze any surrounding objects, including the battlefield.

Juhaku (White Tree): Rukia stabs the ground which creates a trail of ice in the direction of her intended target. The ice then freezes the target from the base up in a continuing freezing process, as it transforms the target into ice.

Sode no Shirayuki manifests herself as a beautiful Yuki-onna dressed in white and light blue clothes. She has long, pale blue hair that is clipped at the left side of her head at the front, while on the right it hangs loose and is cut somewhat shorter. She wears a Furisode kimono: The top part of her clothing has long sleeves that reach the ground, and the bottom part is also long and covers her feet. She seems to draw her Zanpakutō from the palm of her left hand.

Expert Swordsmanship Specialist:Despite her gentle demeanor, Sode no Shirayuki has shown great swordsmanship skill, great enough to easily push back her former partner Rukia. Fitting with her graceful appearance, her fighting style is swift and fluid with no wasted motion.

High Spiritual Power: Her spiritual pressure was great enough to counter Ichigo while his Bankai was released (though he was holding back).

Ice Form: Sode no Shirayuki has the ability to turn into ice and reform herself.