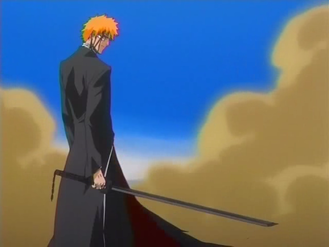 Ichigo Kurosaki is a Human who also has Shinigami powers. He is the son of Isshin and Masaki Kurosaki, and older brother of Karin and Yuzu. He is the main protagonist of the Bleach series.

Zangetsu (Slaying Moon) unlike most Soul Reapers, who can seal their zanpakuto after releasing it, Ichigo's zanpakuto is always in its released form.

Shikai: Zangetsu can summon a sword that takes the form of his constant Shikai release state: an oversized, elegant, black cleaver almost as tall as himself with no crossguard or proper hilt. It is instead held by its cloth-wrapped tang.

Shikai Special Ability: Getsuga Tensho (Moon Fang Heaven-Piercer; "Piercer of Heaven" in the English anime): Zangetsu fires concentrated energy blasts from the tip of his blade in the shape of a crescent moon or in a shape of a wave.

Bankai: Tensa Zangetsu (Heavenly Chain Slaying Moon): It is considered completely out of the ordinary for any Zanpakuto. Unlike most Bankai forms, which usually create some sort of massive creature or effect, The Bankai actually shrinks his sword down to a daitō (Japanese long sword) with a black blade. The crossguard has four prongs bent out to form the shape of the manji (which is the kanji for "ban," meaning "full", as in "full release"). Instead of the cloth his Shikai form had, a short length of chain with a broken link at the end dangles from the base of the hilt.

Bankai Special Ability: Zangetsu's special attack remains Getsuga Tenshō and can be used in the same manners, but can be used in an enhanced form. When used with Zangetsu's Bankai, these potent blasts can become black with a red outline and their path can be controlled, with explosively augmented power and speed.

Physical Enhancement: This Bankai is a compression of his remarkable power, rather than a vast expansion as other Bankai are. This vastly compressed power enables to reach levels of physical and spiritual prowess most Shinigami would have their bodies give out at and cannot handle. It allows Zangetsu to move at very high speeds exceeding those of flash steps, allowing him to be undetectable to unfocused eyes. This Bankai also allows Zangetsu to use his natural strength to its limits. His new speed is so great, that it also allows him to create dozens of tangible clones to confuse his opponent. In addition, his already immense spiritual energy has grandly and explosively increased, and now has a deep black spiritual energy with a crimson outline.

The spirit of Zangetsu resembles a tall (about the height of Kenpachi Zaraki) 40 to 50-year-old man with unkempt facial hair and long ragged black hair. He dresses in tattered all black garbs with narrow sunglasses and a long flowing overcoat that flares out into ragged ends.