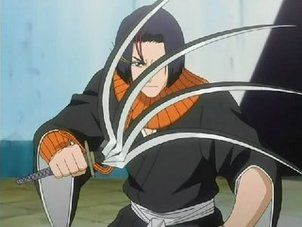 Yumichika Ayasegawa is the 5th Seated officer in the 11th Division of the 13 Protection Squad. Yumichika wears the standard Shinigami Shihakushō uniform with some customizations. An orange piece of clothing sits on top of his uniform around the neck, which covers most of his chest that would otherwise be exposed by his uniform. Yumichika is a narcissist who judges almost everyone and everything by beauty. He is also incredibly vain.

Ruri'iro Kujaku (Azure Peacock), "Nickname" Fuji Kujaku (Wisteria Peacock). It has the form of an average katana with a bronze cross guard shaped like a German cross and a purple handle.

Ruri'iro Kujaku is his Zanpakuto's true name. Ruri'iro Kujaku is an odd sword, as it has a favorite color. "Azure" is its favorite while "Wisteria" is its least favorite. Fuji Kujaku is a Nickname that Yumichika gave it. Ruri'iro Kujaku really hates that name, so when Yumichika calls it that his Zanpakuto sulks and doesn't reach full power. It is only when he calls it by its true name that its potential is achieved. Although Yumichika does not admit it to his 11th Division comrades for fear of being hated, especially by Ikkaku, since 11th Division Zanpakutō are generally used for direct attack, he has a Kidō-type Zanpakuto.  The spirit of Ruri'iro Kujaku seems to be as vain as his owner, as Yumichika is shown visibly getting angry with him for thinking of himself as beautiful, saying that he is full of himself.

Fuji Kujaku: The Shikai command for Fuji Kujaku is "Bloom" (sake, "bloom for me" in the English adaptations). Yumichika runs his hand along the length of the blade as it glows a white light and transforms. As Fuji Kujaku, it takes the form of a sickle-shaped blade, or falx, distinguished from the khopesh by the cutting edge being located on the inside. A hinge at the hilt allows it to split into four identical blades. The guard still takes the form of bronze cross and it also retains the purple handle.

Ruri'iro Kujaku: When Yumichika says the command release "Split and Deviate" ( sakikurue). Ruri'iro Kujaku's blades flare up and transform into a number of glowing peacock feather-like vines. The guard still takes the form of bronze cross and it also retains the purple handle.

Shikai Special Ability: These vines move to grapple and ensnare an opponent. Once the opponent is sufficiently subdued the vines begin to grow energy buds that are being filled with the opponent's Reiatsu. The flowers actually use it as a form of power source, siphoning the Reiatsu the opponent emits in order to fuel their growth. When the flowers bloom the collected Reiatsu is turned against the opponent, either seriously incapacitating them or killing them in the process. By chewing on the petals of the bloomed flowers one's wounds are healed and their Reiatsu is revitalized. (It should be noted that the command Split and Deviate is the true release command for Yumichika's Zanpakuto). When the effect is over the vines release the target and shrivel up. The vines then recede back into the hilt and the sealed blade is reconstituted.

Bankai: Not Yet Achieved

Ruri'iro Kujaku's spirit takes the form of a fully grown, lean-built harpie-man with green and blue wings attached to his hands and forearms. Dark blue feathers grow over his flanks without covering his abdomen and pectorals. He has blue hair with shoulder-length strands framing both sides of his face and a long braided ponytail in the back reaching his waist. The top of his head is covered in bandages and there are orange feathers on his head