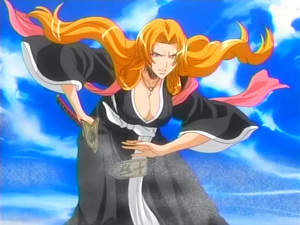 Rangiku Matsumoto is the lieutenant of the 10th Division. She has strawberry-blonde hair and very large breasts. She makes no effort to conceal the latter, wearing loose-fitting robes that expose much cleavage, which she flaunts to try to win over male characters, openly allowing her chest to become a topic in casual conversation. Matsumoto is very carefree and lazy, usually avoiding the jobs of a lieutenant so that she can sleep or go drinking. Despite avoiding her responsibilities, Matsumoto can be serious when need be, and often gives important and useful advice.

Haineko ("Ash Cat"): The Zanpakuto's form is that of a straight-bladed katana. The tsuba is in the shape of a cat's head, with two triangles on the top half curving into ear-points and the bottom half tapering down into a single point. It has a dark red handle. Rangiku keeps Haineko behind her clipped onto her waist obi.

Shikai Special Ability: In its Shikai, Haineko's blade turns to ash, and with a flick of the hilt, she can cut anywhere the ash has landed on.  All the ash that surrounds her opponent(s) might as well be her sword. With simple hand gestures and a thought she can control where the ash goes as well as make it take various forms. So far she has created an enveloping cloud which she can then enclose around her opponents turning it into a deadly tornado. This provides her an advantage while fighting groups of enemies.  Though it now takes on the look of scattered ash, each particle is a tiny blade. Rangiku controls the ash to attack from any direction as soon as she moves the hilt, ultimately enveloping and tearing up the enemy. So evidently, Haineko is very hard to fight against in this form. The main attack strength of Haineko comes from how much ash makes contact, thus why it is clumped together. If the ash was to attack the opponent in single particles, the damage would be little to nothing. The ash can cut through objects as easily as a sword would, similar in principle to Byakuya Kuchiki's Senbonzakura. Rangiku has shown that Haineko can be a defensive weapon as well by having it take the form of a shield to defend against Apacci's attack.  This katana is incredibly difficult to use.

Bankai: Not Yet Achieved

Haineko's spirit takes the form of a werecat with peach skin, turquoise eyes, and maroon chin-length hair. While looking mostly humanoid, she possesses a tail, cat ears and pink fur over her body. The fur on her upper body covers her functions as a rather provocative shirt, not covering her shoulders and mid-section, while the fur on her left leg appears as sort of stocking, and puffy shorts that extend mid-thigh. She also has sharp claws for nails which she can use in the conventional sense of striking at her opponent. She sports a voluptuous figure not unlike Rangiku Matsumoto's; both have curvy bodies and well-endowed breasts.

At anytime, Haineko can manifest the sealed sword form of her former self. This is a straight-bladed katana with a cross guard in the shape of a cat's head, with two triangles on the top half curving into ear-points and the bottom half tapering down into a single point.