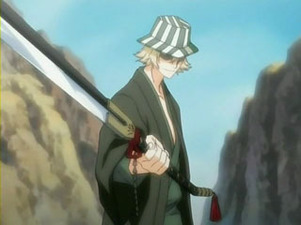 Kisuke Urahara is a former captain of the 12th Division lives in exile in the Human World, where he is the owner of the Shinigami-item-selling Urahara Shop. Kisuke Urahara is a tall light-skinned man with messy, light-blond colored (almost pale) hair and gray eyes that are usually shadowed by his hat. He always wears the traditional Japanese wooden sandals (geta) and a bucket hat, which has earned him the nickname "sandal-hat". Urahara is a keen analyst, highly intellectual, with an uncanny ability to discern an opponent's weaknesses and attack patterns with ease, a quality he passes on to Ichigo during their training together. As a former captain, he is also adapted in using high-level of Kidou and possess a sharp tactical combat. He is also an avid inventor, and while still a Soul Reaper, he had created a number of items that went against Soul Society's norms. Most prominent of these is the Hogyoku.

Benihime (Crimson Princess) When sealed, Benihime takes the form of a shikomizue (a blade hidden inside Urahara's cane). Because it resides in a cane, its hilt is still the handle of the cane, so it looks different from most Zanpakuto.

Shikai: The Shikai command of Benihime is "Awaken" (okiro). Benihime's Shikai takes the form a sleek, medium-sized sword. It has a crimson tassel dangles on the end of the hilt, with has a gentle decorative bend. Instead of a crossguard, there is a U-shaped decoration covers the first three or four inches of blade, with a flower petal design right as it meets the string-crossguard. It also has a red decorative string wrapped thrice around the hilt, with a three-loop bow on one side and a folded paper decoration on the other. Benihime's blade is straight and slim, though somewhat short, with the tip ending in a slanted razor-like edge instead of being tapered to a point.

Shikai Special Ability: Benihime is capable of producing various crimson-colored energy techniques. Kisuke can perform these abilities of Benihime's by a variety of different verbal commands that corresponds to its different abilities.

Nake, Benihime (Sing, Crimson Princess) This technique is Benihime's offensive ability. It fires particularly strong and destructive crimson-colored energy blasts. He is also shown to control these blasts, and can even change the shape, size, and intensity of them. This ability was powerful enough to match Ichigo's improvised Getsuga Tenshō without tiring and easily cancel out Cero and Bala blasts from the Espada Yammy Riyalgo by striking it head-on with this attack after he was able to study the amount of power it took to use it.

Chikasumi no Tate (Blood Mist Shield): Benihime's defensive ability forms an hexagonal-shaped "blood mist shield" in front of Urahara. The barrier is called out with the same command as the offensive attack.

Shibari, Benihime (Binding, Crimson Princess): This technique condenses the energy observed in Benihime's previous abilities into the form of a tangible net, emanating from the blade's tip that can be subsequently manipulated in order to bind and restrict an opponents movements.

Hiasobi, Benihime (Fire-Playing, Crimson Princess): The energy typically emitted from Benihime takes on explosive properties while this ability is in effect, resulting in the production of highly destructive blasts when the volatile material comes into contact with its intended target. This ability is used to "place" these destructive orbs like landmines, which can then be linked together.

Juzutsunagi (Beaded Mesh): By piercing a previously fabricated energy formation created during one of Benihime's other techniques, for instance Shibari Benihime, it can be further infused with the significant amount of combustible power created by Hiasobi Benihime creating a tremendously large and devastating explosion.

Bankai: Not yet revealed