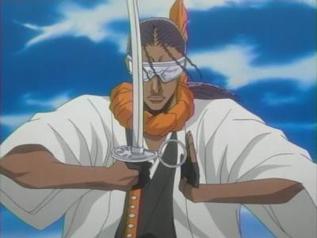 Kaname Tosen was formerly the blind Captain of the 9th Division of the 13 Protectiion Squad. He was revealed as a co-conspirator working for Sosuke Aizen and left Soul Society along with him and Gin Ichimaru. He then became a Commander in Aizen's Army of Arrancar.

Suzumushi (Cricket; Viz "Bell Bug") In its sealed state, Suzumushi looks like a regular katana. The tsuba is in a tear-drop shape, with the base of the drop arcing over the top of the blade, and the point of the drop pointing below the cutting edge. A row of several tiny tear-drop shaped holes decorates the bottom of the curve, and a small ring, approximately 2" in diameter, dangles off the tip of the tear-drop. The ring itself plays a vital role in the activation of Tosen's Bankai. It is unknown whether this is the Zanpakuto of Tosen's own soul or the one he took from the grave of his friend.

Shikai: Unlike most Zanpakuto, Suzumushi has two Shikai commands, each producing a unique automatic effect.

Shikai Special Ability: Suzumushi maintains its form of a regular katana. Suzumushi's release command is "Cry" (nake), which has the automatic effect of projecting a high-pitched tone over a wide area, overloading the hearing of anyone in range and knocking them unconscious. This comparatively humane and painless technique fits with Tosen's self-presentation as a proponent of justice. The ring tone is produced by the vibration of Suzumushi.

Suzumushi Nishiki: Benihiko (Cricket 2nd Movement: Crimson Flying Locusts; Viz "Bell Bug Type Two: Flying Locust"): Suzumushi's technique which changes Suzumushi into its Benihiko form. Suzumushi vibrates momentarily and, after Tosen moves the blade around him in a circle, a trail appears from the sword's path. The trail turns into hundreds of blades that rain down on his opponents.

Bankai Special Ability: Tosen holds up his sword in his right hand, and places his left palm against the ring on his crossguard. The ring begins to spin as it releases spiritual energy the faster it spins the circle then grows bigger and bigger until it's large enough to surround his body. The ring then splits into nine other glowing rings, of similar size, that encircle Tosen. With a slash of his sword, the circles go flying outwards and form a circular perimeter over a large area. Once in position, the ten rings begin to generate a black void that grows in size until it creates a large black dome that's centered around Tosen's body and is anchored to the ground with the ten rings. The dome creates a vacuum that nullifies the senses of spiritual energy, sight, sound, and scent; what Tosen calls Mumyo (lit. "No Light", popularly defined as "Ignorance (of Buddhist teachings)"). The only sense the victim retains is that of touch. Unlike with some Zanpakuto's, Suzumushi does not convert itself into the massive dome that it materializes during Bankai. Instead, the dome serves as a separate extension of Suzumushi itself, allowing Tosen to still wield its sealed form to be used as a weapon while inside the dome, but cannot use its abilities. The technique's main shortcoming is that anyone touching Suzumushi's hilt, not just Tōsen himself, is immune to the dome's effects, so anyone able to grab Suzumushi recovers their senses. The dome only exists as long as Tōsen wills it to, or if he happens to become seriously injured; in either circumstance the dome shreds apart and dissipates.