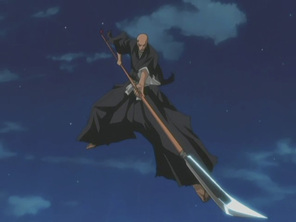 Ikkaku Madarame is the 3rd Seat of the 11th Division in the 13 Protection Squad. In terms of his attitude, Ikkaku is a stereotypical 11th Division member — violent, fight-loving, and rude. This has been noted by Tetsuzaemon Iba, among others. He loves fighting so much that he is unwilling to travel anywhere without a sword.

Hozukimaru (Demon Light) It appears like any regular Zanpakuto when sealed. Madarame does hide a small vial of healing ointment in the base of the hilt, though. Hozukimaru's cross guard is an oval, with what look like three small teardrops in relief on both the top and bottom end.

Shikai: Its Shikai command is "Grow" (nobiro; "Extend" in the English version). Hozukimaru's Shikai is unusual in that Ikkaku slams Hozukimaru's hilt (and sometimes its pommel) into its sheath to activate it when saying the command phrase. Once activated, Hozukimaru takes on the form of what initially appears to be a naginata (spear) with a wax wood shaft. The pommel also has a red horsehair tassel.  While able to deliver powerful blows, it is not very durable as it tends to break against particularly strong strikes.

Shikai Special Ability: Ikkaku uses the command "Split" (sakero; "Split apart" in the English dub) to separate his naginata into its true form which is a Sansetsukon (Three Sectional Staff), after which the sections can independently reconnect and separate again at will.[62] This special ability surprises one's opponents when they first attack. These chains are also able to extend a fair length, allowing Ikkaku to swing his weapon like a flail for mid-range attacks.

Bankai: Ryumon Hozukimaru (Dragon Crest Demon Light) It keeps the three-section theme but loses its naginata properties. Instead, it is merely three over-sized weapons connected by an equally large chain.kkaku's two main weapons are a Chinese Monk's spade and a standard Guan dao. Both have a traditional horsehair tassel at the hilt and a long cylindrical weight for a pommel. The pommels are connected by a heavy chain to the center section, which resembles an axe-like blade with a parallel handle forged into the blunt end and a dragon crest on one side of the blade.

Bankai Special Ability: Ikkaku's Bankai, like his Shikai, is quite unusual. Aside from the increase in power, his Bankai offers no special abilities and no special defense properties. It releases some reiatsu which starts to grow in strength. Ikkaku treats Hōzukimaru a lot different than others (as they just let theirs slumber and use it when they want to do Bankai). But if he forces it to awaken suddenly, cutting the enemy and not getting cut becomes a lot harder to handle than it should be. Thus Ikkaku's Bankai gets increasingly more powerful as the fight drags on. After he performs his Bankai, the dragon crest will slowly fill in with crimson dye as Ikkaku's Spiritual Pressure rises. It fills faster when he spins Hōzukimaru with the center handle. Ikkaku comments that his Zanpakutō is actually very lazy in battle (in stark contrast to Ikkaku himself) and needs to be woken up through causing or receiving injury; which would explain its ability to accumulate attacking power the longer the fight extends. When the crest is completely filled, Hōzukimaru is at its full power.

Hozukimaru's spirit is that of a large man resembling an oni with dark brown skin and orange hair. He is shirtless and wears a white robe in the form of a skirt, revealing a tattoo on his shoulders in a design similar to the dragon symbol on Ikkaku's Bankai. He also appears to have red markings under his eyes, similar to Ikkaku's.