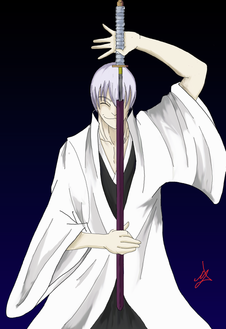 Gin Ichimaru was the Captain of the 3rd Division of the  13 Protection Squad until he betrayed Soul Society, alongside Sosuke Aizen and Kaname Tosen. Gin is fairly ordinary in terms of clothing, and doesn't wear any unique items. His overall appearance, however, is not as normal. He keeps his eyes constantly narrowed to slits (earning him the nickname "fox-face"), rarely ever opening his eyes. Although he appears to be an early to mid twenty-year-old person, he is unusually thin and tall with very sharp features giving him a skeletal appearance.

Shinso (God Spear; Viz "Sacred Spear") It looks like an ordinary wakizashi. The hilt is light-blue with a tsuba made of two slim swirls of metal looping around the blade to make an open oval, resembling an "S".

Shikai: It is triggered by the phrase "Shoot to kill" (Ikorose). In the English Dub, however, he uses a command related to piercing/stabbing and ends the phrase with a personal pronoun (him, her, it) defining who he wants to hit.

Shikai Special Ability: In its Shikai, Shinso's blade glows white and extends at high speed to impale Gin's opponents from a distance. The blade also carries tremendous force when extending, as seen when Gin pushes both Ichigo Kurosaki and the giant Jidanbo out from under the Seireitei gate, despite the latter being firmly braced under it. In addition, Gin can maintain the extension and swing the activated Shinso in wide arcs, attacking multiple targets quickly and simultaneously. Shinso is capable of reaching a maximum length equivalent to one hundred times its original length, earning it the nickname Hyapponzashi (Hundred-span) when Gin was younger.

Bankai: Kamishini no Yari (God-Killing Spear): In its Bankai state, Gin's Zanpakuto does not change in appearance at all, retaining its small wakizashi form. However, as Kamishini no Yari, the blade is capable of reaching lengths equivalent to 13 kilometers (roughly 8.1 miles) at 500 times the speed of sound. The blade can also retract to its normal size at the same rate. Gin has also stated his bankai is not as fast or as long as he claims but he hasn't elaborated on this statement further to determine what he is specifically referring to.

Poison: Kamishini no Yari's true ability as well as its deadliest aspect is not based on its length or speed but rather its ability to turn into dust for just a second when it expands out and contracts. There is a deadly poison inside the blade that dissolves and breaks down cells. He can leave a sliver of his Zanpakuto in an opponent when he retracts Kamishini no Yari, allowing him to kill an opponent at any time when he chooses to by uttering the release command "Kill, Kamishini no Yari" (Korose, Kamishini no Yari) for the technique, while placing his hand up to the target. The result causes the target to completely break down and dissolve at the cellular level from the inside out.

Blade Extension & Contraction: Gin has made claim that his Bankai can achieve its full length at 500 times the speed of sound: exactly 171,500 meters per second in order to arrive at its full length of 13km in under 0.08 seconds, which would make Kamishini no Yari not the longest Zanpakuto, but the fastest. Because the blade's extension and contraction speed is a highly dangerous ability, Gin tends to downplay its speed whenever he talks about his Zanpakuto, and instead focuses on the length and power of the blade in order to gain a psychological advantage over his opponent.

Buto (Dance (Step)): By adopting a stance where he firmly grips Kamishini no Yari with both hands and places the Zanpakutō's hilt squarely to the center of his chest, Gin is able to unleash the tremendous extension and contraction properties of his Bankai to an even more terrifying extent than its normal state. This occurs in the form of a piercing maneuver where the extension and contraction of the blade becomes almost completely-unseen to even the most-diligent of observers.

Buto: Renjin (Dance (Step) Serial Blade): This ability repeats the action of extending and subsequently contracting Kamishini no Yari, as observed within the technique Butō, multiple times in rapid succession. The entirety of this process is completed in a mere moment, resulting in the individual steps involved in this technique becoming virtually indistinguishable from each other, generating an apparent mass of numerous blades that leaves little opportunity for the intended victim to evade successfully.