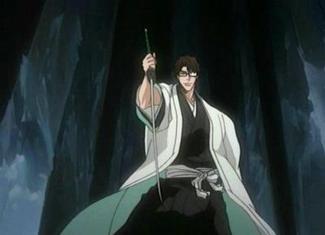 Aizen Sosuke is the former captain of the 5th Division in the 13 Protection Squad; he later leaves Soul Society with his followers, Gin Ichimaru and Kaname Tosen and becomes the series's main antagonist. During his tenure as a Soul Reaper, Aizen's public image was that of a bespectacled intellectual whose humility and warmth was equalled only by his dedication to the 13 Protection Squad. However, it eventually became apparent that this was a carefully-crafted facade designed to draw suspicion away from his true, sinister nature.

Kyoka Suigetsu (Mirror Flower, Water Moon) In its sealed form, it resembles a normal katana. The only decoration is the tsuba, which is a hexagon instead of a rectangle. The two sides parallel to the blade are long, whereas the four sides above and below the blade are shortened, making it into almost a diamond or prism-like shape. It has a green handle.

Shikai Special Ability: Kyoka Suigetsu's Shikai ability is Kanzen Saimin (Complete Hypnosis). It controls the five senses to the point that it can make the target misinterpret another person's form, shape, mass, feel and smell to be that of the enemy. The initiation condition for the hypnosis is to show the enemy the release of Kyōka Suigetsu. After seeing it just once, that person will completely succumb to the hypnosis. After that, every time it is released, that person will fall under the thrall of the hypnosis. The hypnosis is apparently long-lasting, seeing as the Vizard are still affected by Kyoka Suigetsu even though they were hypnotized at least 110 years ago. Since the spell works when you see the ritual, those who cannot see are consequently immune to the hypnosis. When he turns off the hypnosis by force of will, the image shown melts away/shatters. Kyōka Suigetsu's Complete Hypnosis is absolutely flawless; even if the target is aware that they are under the hypnosis, they cannot resist its influence. Kyoka Suigetsu's hypnotic abilities make it a highly useful tool in combat, as Aizen can quickly create simple or complex illusions to deceive his opponents. For example, by creating a decoy of himself, or other illusions to distract his opponents, Aizen can hide his own movements and attack with impunity. His opponent, meanwhile, will remain focused on the illusion until it's too late to react.


Bankai: Not Yet Revealed.